How to make a Secure App using Parse

This is a guest tutorial from Joren Winge at Startup Soul. We help startups build and launch their products fast. Our friends @ Back4app asked us to show you how to build a secure app on top of Back4app.

In this post, we’ll walk you through the steps to make a secure To-Do app on back4app. Security is important. If your app takes off at all you will need to make sure your app’s data is secure and that your system can’t be hacked.

Lets first talk about the first level of security, ACLs - (access control list). ACLs are basically just rules you set when you create an object. Let’s say you create a to-do item, at the time of creation you can say who the item can be read by, and who it can be written by. You can assign certain users to be able to read that item or write to that item or you can set either one to the public which allows access to anyone. But ACLs don’t always work.

There are instances where you might need to have some more sophisticated logic instead of a simple ACL. Sometimes you can also paint yourself in a corner where you may need to give someone access to an object on a conditional basis instead of an absolute basis like with ACLs. So let’s skip using ACLs. They are too rigid and at the same time allow for too much access to the data. So I’m about to give you the secret to building a secure app on Back4App and Parse Server. You ready?

Class level permissions! Yes, we will set class level permissions for each table in our database. And the level of permission we will set is no permission at all. We will lock down each and every table so that no read or write access is allowed to anyone! Sounds extreme, I know, but this is the first step in creating a secure app. The only permission we will allow is on the User table which will be for the creation of new user objects and for the user to view his own data which is required for refreshing the current user.

We will secure the user from being able to view other users data by using ACLs. This is the one time we will use ACLs so I guess they are not totally useless. They are good to have but don’t rely on them to do everything. But how will we access the data you ask? Good question, glad you are thinking about it! Well, the secret to letting clients access the data in a controlled manner is to make each and every single interaction between the client and database filtered through a cloud code function. Yes, anytime you do anything with your app it will now be through a custom cloud code function. No more client-based PFQueries.

You pretty much skip using the entire client based Parse SDK except for Sign Up functions, Sign In functions, Forgot Password functions, and Log Out functions. For these, we still will use the native client SDKs. It’s just easier. Have you ever written cloud code before? No, you say? Well, it’s pretty easy. It’s just Javascript and it uses the Parse Javascript SDK but internally on your own app’s server. In fact, since Parse Server is based on Node JS, it’s pretty similar to writing routes with Express, but even easier since your query language is already installed and cloud code functions are a lot easier to write than an entire Node JS Express app.

So here is what we will do. We will use an iOS todo app that I have already created. We won’t bother with showing you how I created it. Instead, we will focus on writing cloud code and securing the database. The todo app will be a secure app where you can only access your own todos and you can only write your own todos. The data will be secure on the server safe from malicious rogue clients. I will also show you how to write a secure Parse background job - basically, the same thing as a cron job - so that you can have automated services send manipulate your data on a schedule. Sounds complicated but it’s not. Just imagine little server robots that do whatever you want on an automated schedule. Sounds cool right? Ok, so here we go!!!!!! 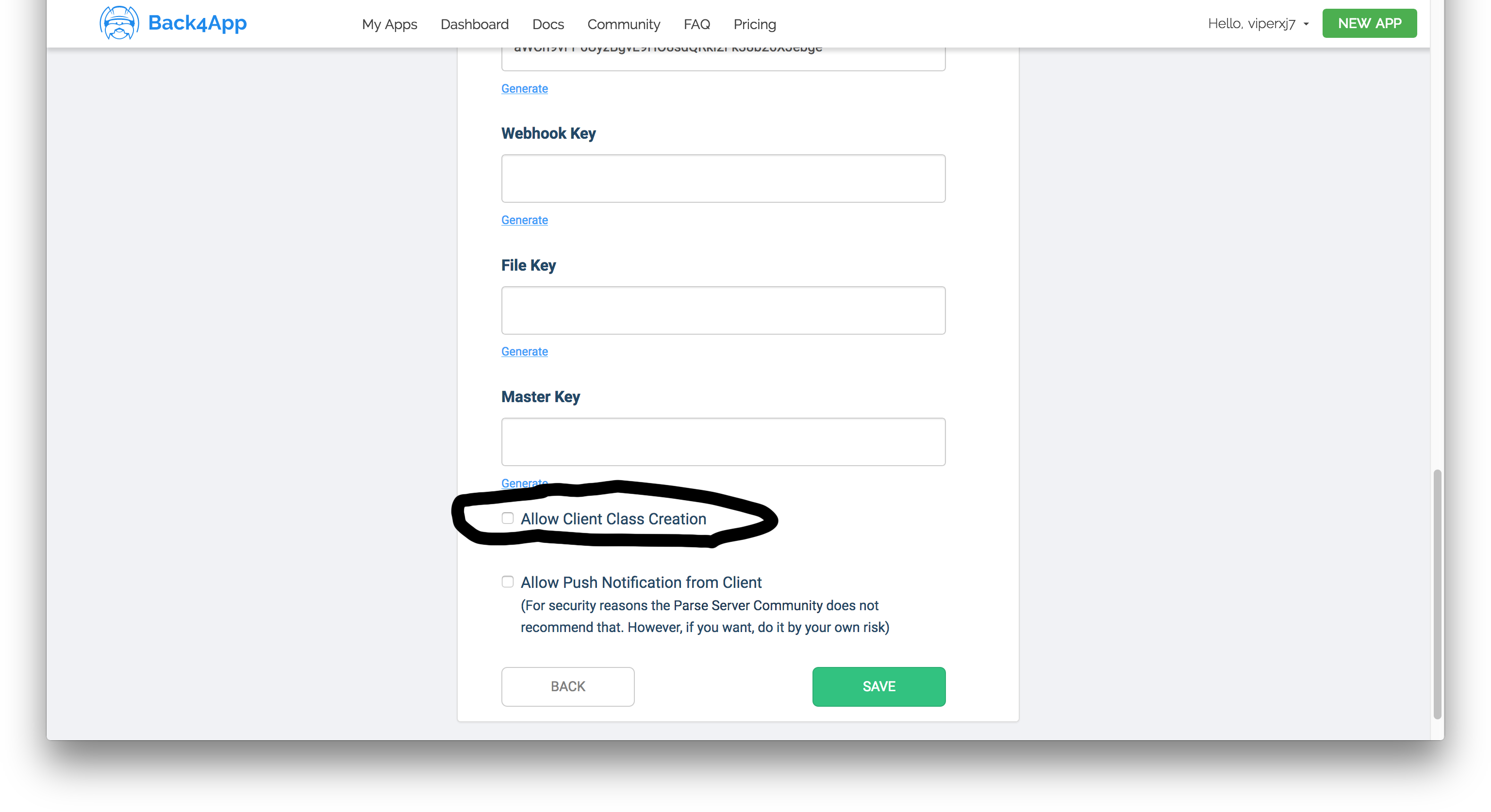 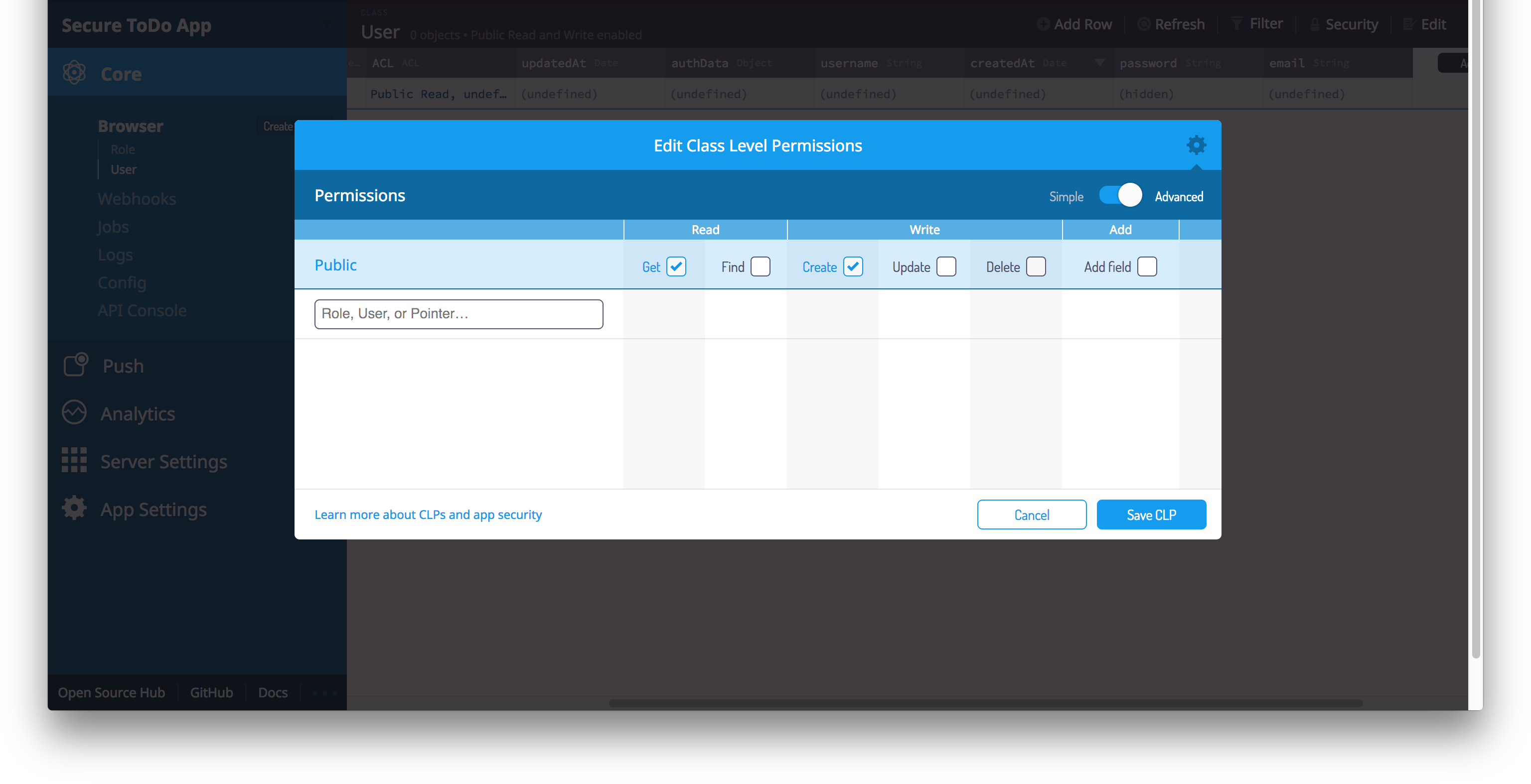 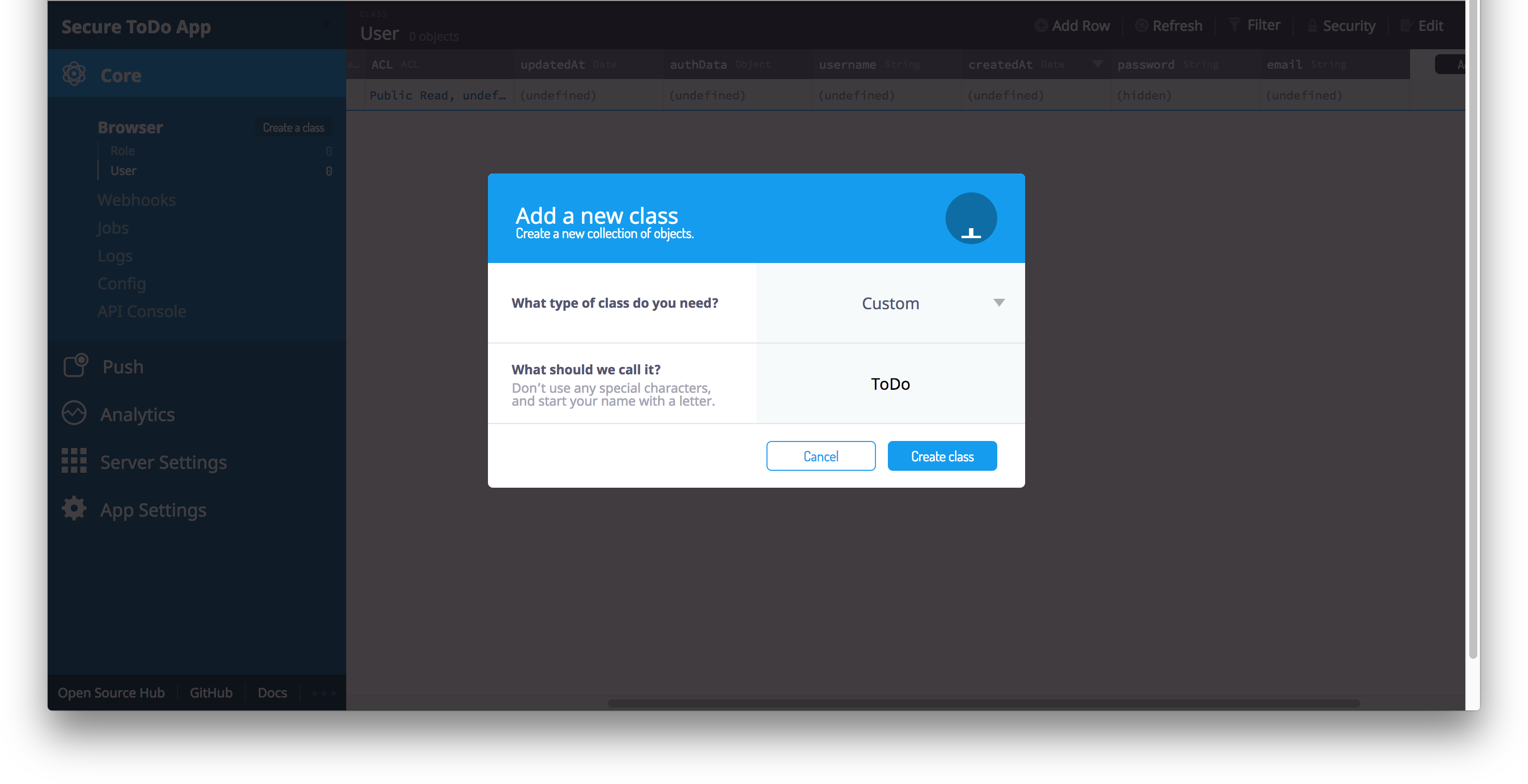 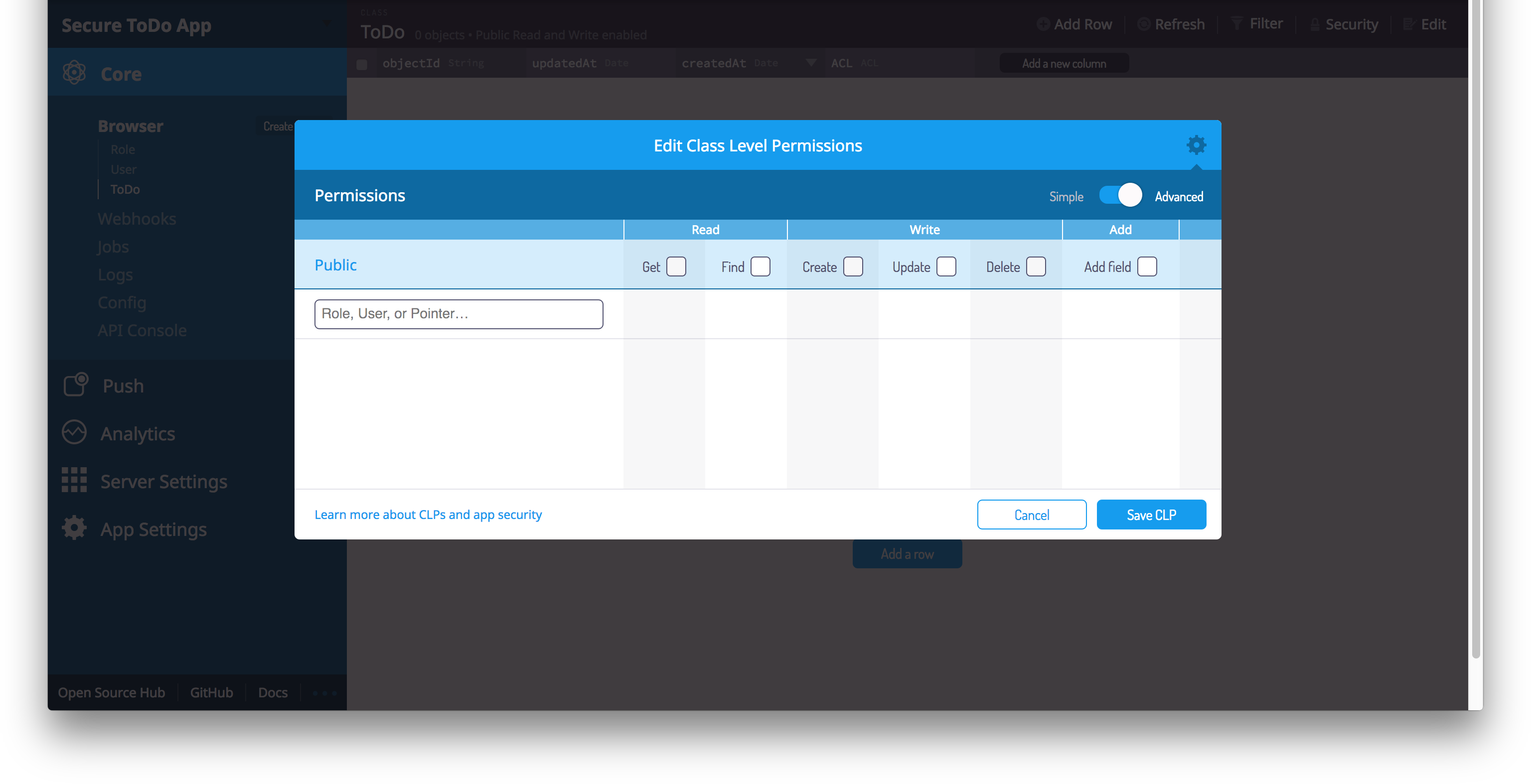 5) Let’s add some columns to the ToDo class: 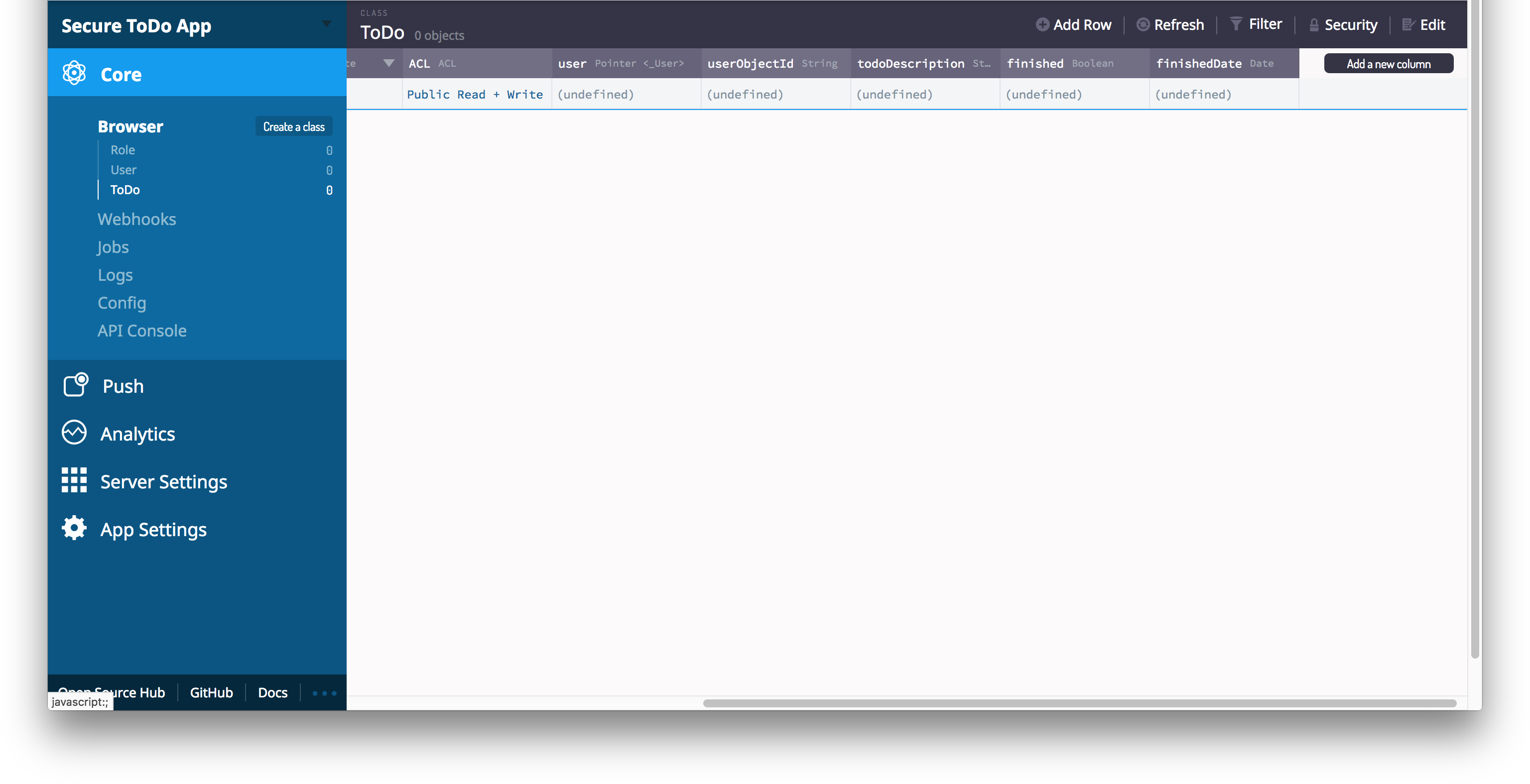 The client is a pretty basic to do app. It uses the built in parse functions to login, create a new user, and reset your password. Besides that everything is cloud code based and secure. The user’s ACL’s are also set as soon as they login or signup just to be 100% sure the system is secure. Let’s start by writing the cloud code function to set the user’s ACL upon logging in or signing up.

At any time, you can access the complete iOS Project built with this tutorial at this GitHub repository.

You can also access the Main.js cloud code file built for this tutorial at this GitHub repository.