You can also specify the datatypes according to your application needs and persist types such as number, boolean, string, DateTime, list, GeoPointers, and Object, encoding them to JSON before saving. Parse also supports store and query relational data by using the types Pointers and Relations.

In this guide, you will learn how to perform basic data operations through a CRUD example app (ToDo list App), which will show you how to create, read, update and delete data from your Parse server database using the ParseSwift SDK.

This tutorial uses a basic app created in Xcode 12 and iOS 14.

To complete this quickstart, you need:

To better understand the ParseSwift SDK you will perform CRUD operations on a To-do List App. The application database will have a simple task class with a title and a description (both strings). You can update each task’s title and/or description.

Quick reference of commands we are going to use

Once an object conforms the ParseSwift protocol, it automatically implements a set of methods that will allow you to manage the object and update any changes on your Back4App Database. Given the object ToDoListItem

these methods are listed below.

Once created an instance of ToDoListItem object and set its custom properties, you can save it on your Back4App Database by calling any of the following methods

For reading objects stored on your Back4App Database, ToDoListItem now provides the query() static method which returns a Query<ToDoListItem>. This query object can be constructed using on or more QueryConstraint objects int he following way

Given the objectId of an object stored on you Back4App Database, you can update it in the following way 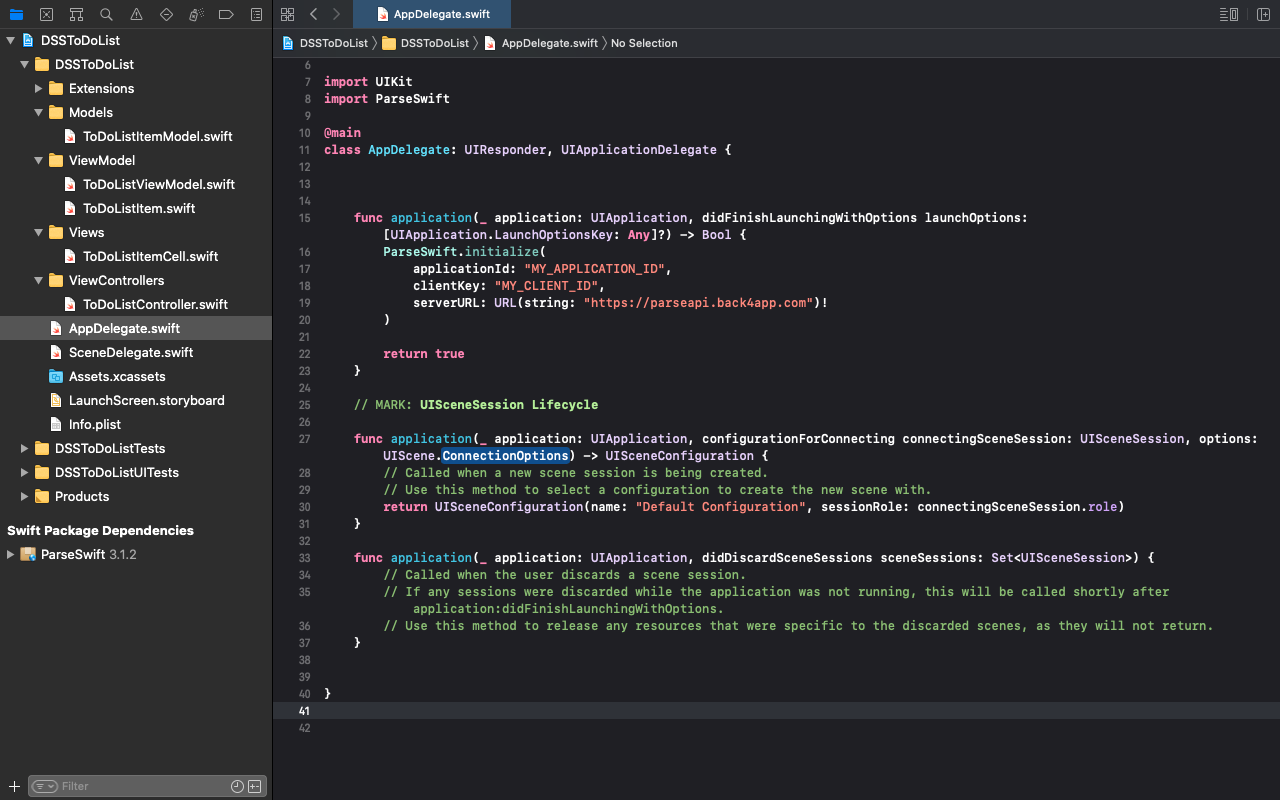 Go to Xcode, and find the SceneDelegate.swift file. In order to add a navigation bar on top of the app, we setup a UINavigationController as the root view controller in the following way

The root view controller class (ToDoListController) for the navigation controller is a subclass of UITableViewController, this makes easy to layout a list of items.

Objects you want to save on your Back4App Database have to conform the ParseObject protocol. On our To-do Liat app this object is ToDoListItem. Therefore, you first need to create this object:

This object defines a class in your Back4App Database. Any new instance of this object is then stored in your database under the ToDoListItem class.

In ToDoListController we should implement all the necessary configuration for the navigationBar, and tableView properties

To conclude this step, we implement the custom table view cell ToDoListItemCell

Now we start implementing the createObject(title:description:) method. Create an instance of ToDoListItem using the init(title:description:) initializer. In order to save this new item on your Back4App Database, the ParseSwift protocol provides a save() method. This method can be called synchronously or asynchronously, choose one of them according to your use case. An asynchrononous implementation should look like this

Now we can complete the action for the add button located at the right side of the navigation bar. Go to ToDoListController and add the following

In this tutorial we use a query which will retreive all the items of type ToDoListItem from your Back4App Database. In case you want to retreive a set of specific items, you can provide QueryConstraint elements to ToDoListItem.query(QueryConstraint...). For instance, to fetch all items where title == "Some title", the query takes the form

Once you have the query ready, we proceed to retreive the items by calling query.find(). Again, this can be done synchronously or asynchronously. In our To-do List app we implement it asynchronously

With readObjects() completed, we can now fetch all the tasks stored in your Back4App Database and show them right after the app enters to foreground. Go back to ToDoListController and override the viewDidAppear() method

Deleting objects on your Back4App Database is very similar to creating objects. We begin by creating an instance of ToDoListItem with the objectId of the item we want to delete. Next, we simply call (synchronously or ascynchronously) the delete() method of the object. If the deletion was successfull we update the UI, otherwise we report the error

With deleteObject(item:) and updateObject(objectId:newTitle:newDescription) completed, we proceed to add the corresponding actions to call these operations. Go back to ToDoListController and add

As we pointed out earlier, the accessory button in each ToDoListItemCell triggers an edit sheet via the tableView(_:accessoryButtonTappedForRowWith:) delegate method.

At this point, you have learned how to do the basic CRUD operations with Parse on iOS.