Since you are here delving into Back4app docs, you know that Back4app is a flexible low code Backend. It allows you to interact with your backend in several different ways, the way you like it. If you want you can use the REST API, or you can directly use a Native SDK for flutter. In this tutorial series, we are going to explore using the new shiny GraphQL API with Flutter.

This guide was written by Chinmay, a Back4App Partner at Hybrowlabs

GraphQL is an alternative architecture to the REST API standard. GraphQL was born when the Facebook team was rebuilding their native applications from scratch and they were in heavy need to optimize the data they received from the backend.

While they were refactoring their services as a set of resources, they got frustrated because it was taking them nowhere.

They took a step back and rethought the data as an interconnected graph of objects instead of isolated REST resources. This made a big difference to their application architecture and that’s how GraphQL was born. Since GraphQL was released out in the wild in 2015, it has been getting huge popularity and buzz and has been adopted for use in teams like Twitter, Airbnb, Atlassian, Github.

At Hybrowlabs, a Back4App Partner, we build modern, data-intensive web and mobile applications. We adopted Back4app as our backend service of choice because of its ease of use, optimization, and schema definition features that are provided on top of the already awesome MongoDB database.

Most of the time the applications in the applications we engineer data that gets displayed or manipulated are not just from a single Back4App class. Rather this data comes from multiple classes. The Back4App-GraphQL combo makes it very easy for us to tackle such scenarios.

All the while it allows us to reduce the network footprint to 2-3 calls per screen load, just bringing the data we want. On the other hand cloud code that we define easily gets documented because of the strongly typed nature of GraphQL. This makes our code maintainable and easy to understand.

TLDR; here are the advantages of using GraphQL 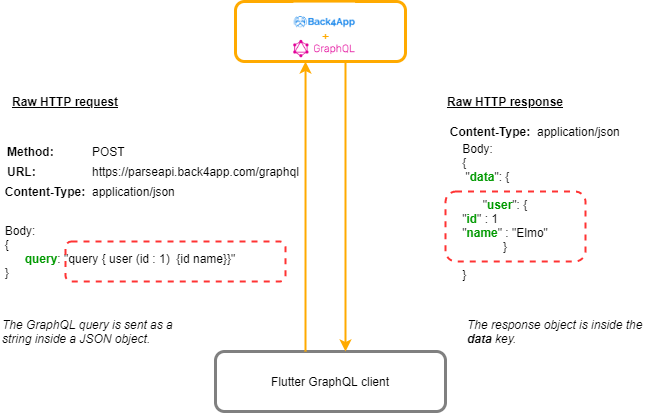 It is often very difficult to architect a GraphQL backend solution combining the flexibility of NoSQL databases while preserving structure and organization provided by having a type and schema structure of GraphQL.
Back4app has always had this structured schema-based design and now GraphQL takes it to a whole new level by creating an API knowing semantics of the type system.

On the other hand, as we know Dart (which is what Flutter is based on) is a strongly typed language. Yes, Dart is very particular of the type of safety.
With GraphQL we have a schema that can be reused on the client-side. This makes life a lot easier. Also knowing the type-schema that can be fetched in the future really helps as it allows us to implement advanced caching and query invalidation algorithms on this data.

For interacting with our GraphQL API we will leverage the awesome graphql-flutter library. So let’s understand the features the library provides:

Following is a ProgramingLanguage Class that I have created on Back4App:

When navigating into the GraphQL section of the API for Back4App, you will see the previously illustrated console of Back4App. This console will now have all the mutations and queries automatically created!

When i go to the GraphQL section of the API for Back4App, we will see the previously illustrated console of Back4App. This console will now have all the mutations and queries automatically created!

The Flutter GraphQL client implements various ways of caching the data, they are:

Mobile experience expects that it is offline enabled by default. Doing this with Flutter and Rest API is very tedious. You have to store the data into the SQLite database, check if the data is present or not, write SQL queries to fetch the data, and then also do the network calls to update the data.

That is a lot of work, which is totally bypassed with the use of this plugin and offline support for Queries comes baked into our Flutter application.

Many GraphQL server libraries do not support a file upload facility using the GraphQL queries. For uploading a file we have to call a separate REST endpoint. Upload the file, get the URL, then pass it to the GraphQL API in the form of a string. Also, we have to manually maintain the file metadata like filename, etc.

Back4App has support for file upload standards backed into the Back4App GraphQL API. When the file is uploaded, it is uploaded as a FILE type of GraphQL, which corresponds to a Back4app FILE in GraphQL. Automatically, we have stored the file into highly scalable Back4app File storage backed by AWS S3.

Users have come to expect a very engaging UI, and instantaneous feedback. Optimistic UI is a UI/UX principle which in essence says that we should not for the action to become over. But instead, we show feedback to the user that we have completed the action!

This is done with the assumption that the action will mostly succeed 99% of the time. If the action unfortunately fails we show a failure message saying we could not complete the action.

Flutter GraphQL comes with baked in support for defining the optimistic mutations which makes it far easier to implement this complex UI interaction system.
Thus with this, we have a very well-optimized base for building modern-day applications.

In this guide we introduced you to some important advantages of using GraphQL on your Flutter project on Back4App. In the next guide we are going to put our hands on code and start by setting up our Flutter GraphQL Client for using Back4App API.