In our previous guide, we have learned how to prepare our Relay Environment. Now you’re ready to start developing your React Native app.

In this guide, you will learn how to make your first query on Back4App. We’re going to dive into the Relay Query Render, understanding its main principles and use it to consume your first data from Back4App.

Get an overview of Relay Query Renderer;

What is the Query Renderer?

As well as React builds a tree of components, Relay builds a tree of data components. This means that each component of the application will be the owner of their fragment data. The fragment will contain the data information necessary to render it on screen and Relay ensures that this data is available before rendering the component.

Handling this whole approach, the Query Renderer is a root component necessary to compose those fragments and prepare the query to be fetched from our back-end.

Why understand the Query renderer?

Understanding the use of Query Renderer makes it important to abstract your application in different ways. A good abstract of code could prevent hours of work, errors, debugging time, etc.

How it works the renderer together with Back4app APIs

In the last tutorial, we have prepared the Relay Environment file, which specifies the Back4App connection info. Using this configuration, Relay will take care of the communication with Back4App APIs. You don’t need to worry about the connection. Just focus on building the data components.

Let’s create your first class and populate it with a few objects using the Back4App GraphQL Console. The Person class has 2 fields name which is a string and salary which is an integer. Go to the Dashboard->Core->GraphQL Console and use the code below:

You’ll see the result below: 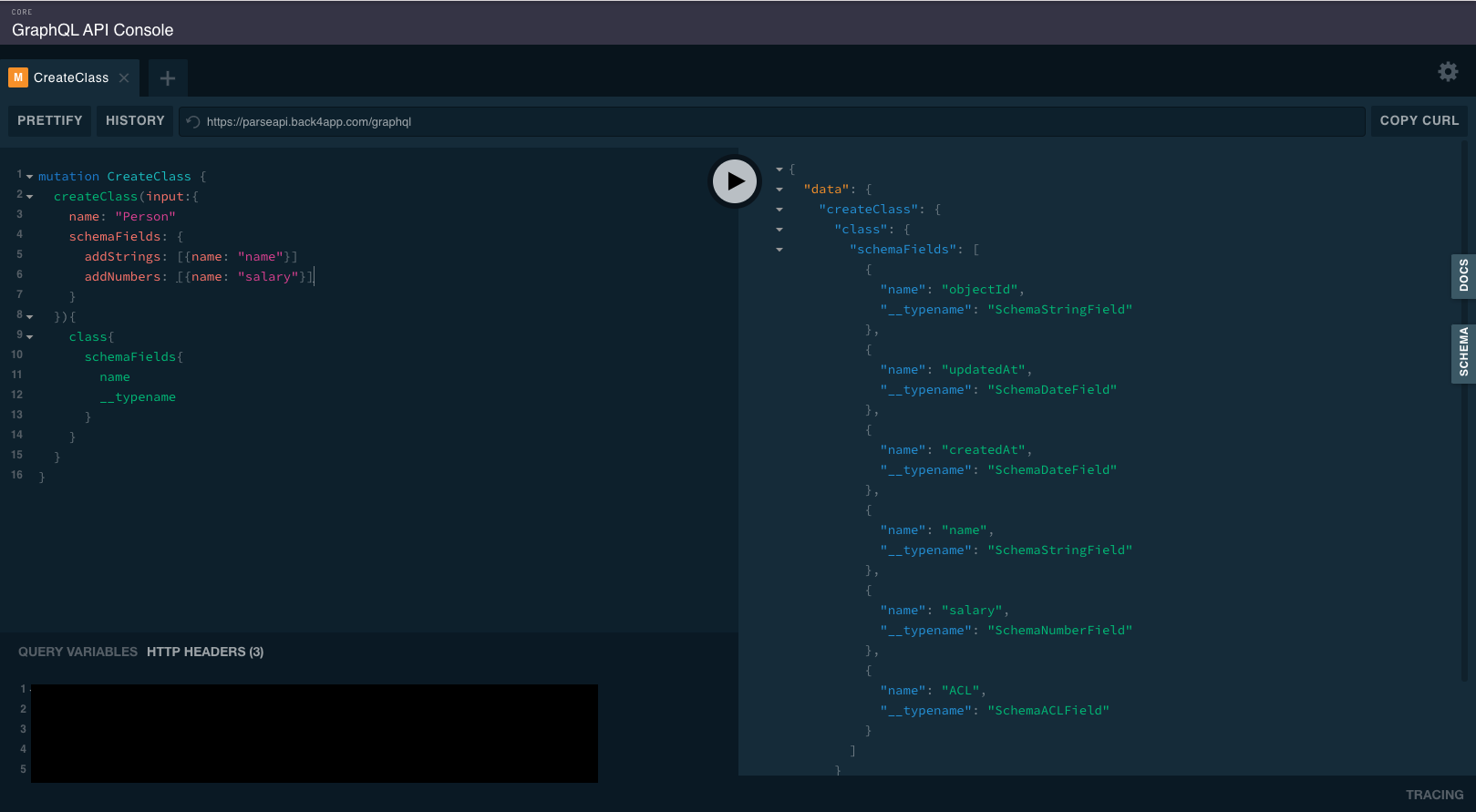 Now let’s create some objects inside this Class. Go to the create object mutation guide and see how to handle this case. Make sure you are using the latest Parse Server Version in order to use the most recent GraphQL API notation available on Back4App.

Now, the Person class is created and has a name and salary field.

After creating a new class, Back4App automatically generates all the necessary resources to use the back-end safely.

One example is the list of objects. Back4App already created the connections necessary to query the list of Person: People.

To better understand, go to the playground, refresh and open the docs tab and look for People. Back4App generated the connection field. You can also query the class person as a list. Note that the Query.people field is a PersonConnection.

Relay will consume the connection field to render a list of the Person’s objects. 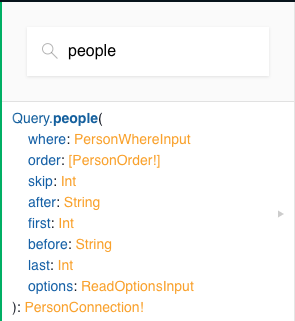 It is important to remember that if a new class goes into your application, it will be necessary to update the schema inside the root of the React Native application.

If necessary, go to Download Schema docs and repeat the steps to update the schema.

Before we continue the tutorial, let’s introduce you to the fragment container.

Let’s create a component that will be the Person info owner. This component will contain the person’s name and salary. Here you can ask any person field to build your component. Now, we’re going to proceed with these two fields.

Replace the line of export default by the code below:

The code above will create a fragment of a Person that asks only for id, name, and salary.

Finish updating the rest of the component with the following code:

The next step is to create the Query Renderer for your objects list. The Query Renderer is a root component for retrieving the data components and preparing them to fetch data from the backend. You will learn how to retrieve data for a Person Class on Back4App.

Step 4.2 - Understanding the props of QueryRenderer

Let’s start with a Query Renderer with their props empty: graphql, variables, and render. Step by step, you will implement each one incrementally.

First of all, your application needs to inform the query for Query Renderer. Here, our application will consume a list of People. On query props, paste the following code:

The graphql comes from react-relay and implements the query as a string.

When necessary, the query renderer will consume variables. A good example: when the application requests a query for a person by id. As this is not the case right now, let’s pass by null on the variables props.

This query will return a list of people. The query renderer ensures that the data will be available to render. If it doesn’t, shoot an error. The props responsible for this is the render.

Populate the render props with the following code:

Replace the commented todo for a javascript map for rendering a person card for each result from the list.

As said, the query renderer takes responsibility for making the data available only when it is ready. Until then, a loading message will be displayed. If an error occurs, it will be displayed on the screen preventing an unexpected application crash.

By last, let improves the render of person replacing the .map by a new function. Put it before the Query Renderer:

Before starting the application, the Relay needs the Relay Compiler to run and generate the component types. For this, run into your terminal:

On app.js add the followng code:

The code of app.js comes originally from create-react-native-app. It added a View with a style to center the content on the screen with a margin of 10px from the top. Inside of it has a text with a label to give some context for the print and the PersonRenderer to show the list of person.

You need to get the following result:

One of the powers of the Relay Compiler is to generate the types from each data component. Let’s type the PersonRenderer and PersonCard to make the application more powerful.

Go ahead to PersonCard, create a new type object and name it PersonCardProps:

Add the person inside the type PersonCardProps:

On props arguments from PersonCard, type the component with the PersonCardProps:

The final result of both components should look like:

The PersonRenderer was built to show how a query can be done in easy steps, combined with the power of the Back4App server. In the next guide, you will learn how to retrieve a specific Person object and show their attributes.