Catch the Monster is a Game Template that makes use of Universal Geolocation. The gameplay requires you to find monsters in any area by using the app to scan the place.

Have you ever thought of creating a mobile game app? If yes, this template is what you need to make your dream come true. Catch the Monster is a Game Template that makes use of Universal Geolocation. The gameplay requires you to find monsters in any area by using the app to scan the place. Once the app finds a monster, you are required to move closer to a distance of at least 50 meters to capture it. That is how you earn points and move higher on the leaderboard. The app also allows you to share your scores in social media, through SMS or Mail.

The Add admin can set up the gameplay by inserting monsters from different locations of the world into the Parse Dashboard. You achieve this by adding the monster’s name, coordinates, and points using the Parse Dashboard. The user who plays the game will have to search for monsters within a designated area, and when one is found, the user taps the monster and get its coordinates on the map. The player then uses the embedded map to select a route to reach the monster from the current position.

The step-by-step guide for setting up the game is included in the app package. 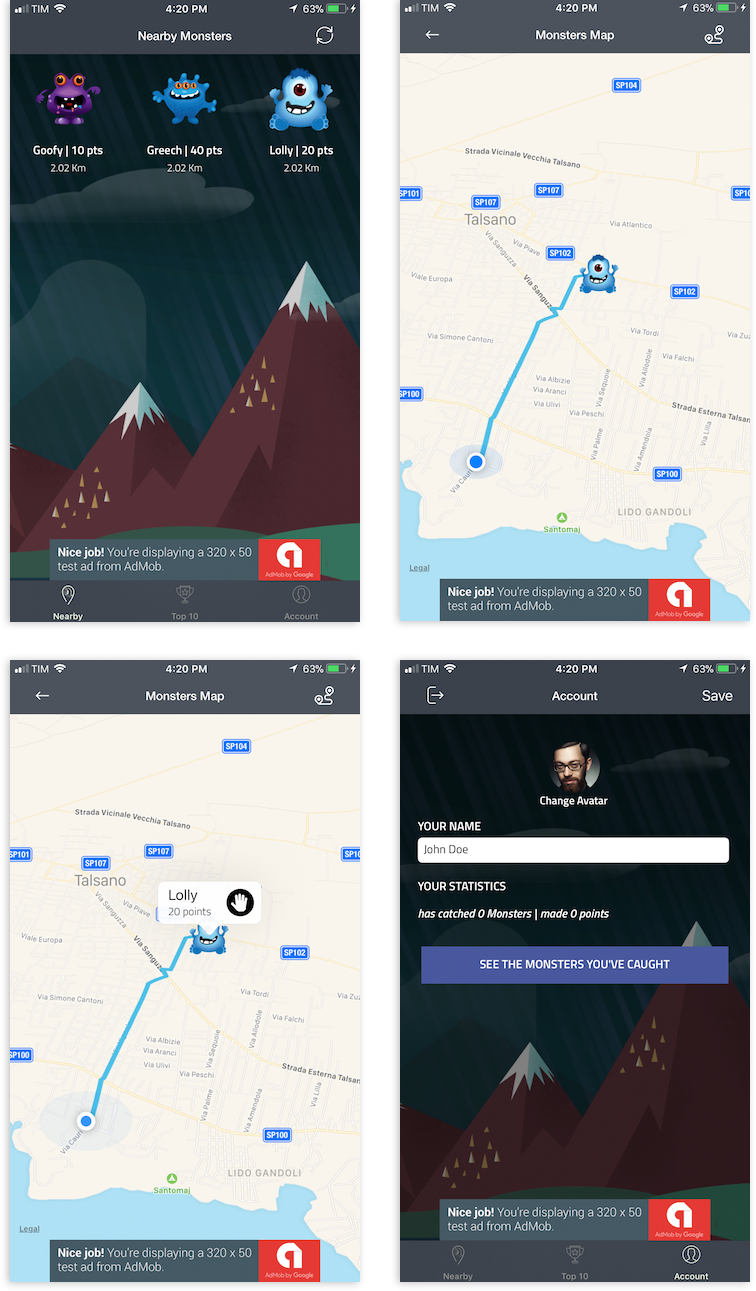 GUIDELINE FOR TESTING AN PUBLISHING THE GAME

First of all, create some monsters around your neighborhood. After that, use a real device to test the app as a player so you can capture the monster by walking or driving towards them.

Bear in mind that once a monster is captured, it is removed from the monster’s class, which is in the Parse Dashboard. Removing the class prevents other users from catching the same monster you have already caught in another area. So, you should visit the Parse Dashboard and add monsters daily to keep the gameplay going.

Besides inserting monsters and localizing them, the Parse Admin can use the Parse Push web console to send push notifications to all devices that installed the app. Let’s assume that you just added monsters in Chicago, you can send a push notification to all users such as “New monsters invaded Chicago last night, capture them all and save the city!”

Note that you will need to get a Google Map API key to make the map function with your app. Moreover, since the app is using a Parse backend, there is no need for a domain name and hosting to get the app up and running. So, you will be saving lots of money on getting your server resource in place. The Monsters is an Android, Universal project which you can customize easily. The backend use Parse SDK hosted on http://back4app.com.

We will offer free support services to fix any encountered bug in the original code. However, to fix your messed-up code, you may have to pay some money for our support services.

· What is Parse SDK and Back4app?

The article in the link below sheds more light on Parse SDK and Back4App SDK: https://hubpages.com/technology/Parse-SDK-will-not-shutdown-in-thanks-to-back4app

· Is it possible to host Parse Server on my private server?

Yes, you can host it on your private server. The official guide http://parseplatform.org will show you how to go about it. However, I do not provide support for setting up a Parse server.

· Do you provide free support for this app template?

I do provide free support for problems that stem from a bug in the original code. But fixing issues that arise after you have edited the code attracts a service charge. You can upload the project files to me, or I can connect to your system via TeamViewer to provide a fix.

· How do I go about renaming the app package name?

The tutorial in the link below will guide you to rename the app’s package name. https://hubpages.com/technology/Android-How-to-rename-an-app-package

· What version of Android Studio should I use for editing the template?